Tēnã koutou katoa! My name is Moose @moose_in_queenstown but my family also affectionately call me Moosey, Moo Moo, Mr Moo, Moosey Woosey. Not entirely sure why... but they do!

I’m a two year old Long Haired German Shepherd who lives with my two-legged family and my brother from another mother, Disco. He's a big funny looking Groodle.

I was born in NSW at Sunhaze Kennels and raised in beautiful Noosa Hinterland not far from Cooroy. I had such an amazing time socialising with groups of dogs on a daily basis, as one of the grown ups in my family had established a dog adventure business called Disco Dogs Noosa.

Life was awesome! We all loved Noosa. Amazing weather and beautiful beaches and the chilled relaxed Aussie lifestyle and people, what’s not to love?!

However, our Dad was offered a role within the company he works for out in New Zealand and as our Mum is a NZ Citizen and we have a lot of close family there, the tough decision was made to take this once in a lifetime opportunity and make the leap across the ditch.

After many many calls and emails (some with not even a call back) the family selected Petraveller to send us with. They were nothing short of amazing and even though they were providing exactly the same service as some other companies, Petraveller came in quite a bit cheaper than other quotes and you could always speak to someone on the other end of the phone.

They also said we could fly at the time requested (subject to flight cancellations due to Covid). Other companies had been saying we would have to leave weeks before our family or weeks afterwards. Neither of these options appealed to us. So it was a huge relief to find out we could leave a few days prior to them.

We needed to have a vet check to make sure we were up to date on all our vaccinations and bloods taken at a specific date prior to departure. They also checked we were microchipped. All of which was arranged by Petraveller.

Luckily Disco and I have always been 'crate trained’ so this made that part of the process easy and so much less stressful as a crate is a ‘safe place’ for us. It didn’t make leaving my favourite sibling Bella any easier for me though. I hate being away from her (don’t tell anyone…but she’s my favourite person in the whole world).

Our transport cost a total of approximately $5,800 for both of us. This included the cost of keeping the travel crates. *Note to people with large breed dogs space on planes is more difficult to secure than for little ones, so do try and call at least 6-8 weeks prior to when you intend to leave.

When we arrived we were transported to Top Notch Kennels in Christchurch where we were given the very best treatment dogs could wish for and our family were able to keep an eye on what we were up to daily on their instagram. Disco and I were able to share a kennel which was great as I really rely on Disco for my security. We highly recommend Top Notch Kennels to anyone in the Christchurch NZ area or anyone passing through and needing a place for pups to stay. I was particularly happy when Shadow came to stay there too. Hopefully Shadow will be coming to Queenstown sometime for a playdate as our humans have kept in touch.

Our family have made their home in Queenstown and to anyone who doesn’t already know it’s known as the "Adventure Capital of the World”. It sits on the shores of Lake Wakatipu amongst dramatic and breathtaking alpine ranges.

It’s home of The Bungy, The Shotover Jet and so many more exciting adventure sports companies. Not to forget great wineries and breweries which thankfully most are dog friendly. Our family love Cargo Brewery in Gibbston. Disco and I were inundated with pats and cuddles from a bus load of people visiting while we were there which was the best. Also Farelli’s Italian is a great dog friendly easy going place to stop in the centre of Queenstown for pizza and pasta. The kids like to finish off a meal out in town with a trip to Cookie Time which is great as we then get to lick clean the tubs.

We’ve also just had The Coronet Peak Meadow Fresh Dog Derby here, where basically dogs and people run as fast as they can down the ski fields. It was hilarious! My family decided to only take Disco to this as sometimes situations like that can be a bit overwhelming for me. Remember I grew up on a rural property. I’m friendly but can be very vocal ’talking’ as my family like to call it, when I’m a bit uncertain or over stimulated by situations, especially when we first arrive somewhere. I’m working and improving on being around lots of people in busy places. I love it and I love people but I need to learn to keep my voice down sometimes. Most of the time my family take special treats or things like a Kong toy filled with Mutt Butter to keep me occupied when we are out eating at places so I don’t disrupt other people. Sometimes I surprise them by falling asleep under the table and being very well behaved like my older brother Disco. I like to keep them on their toes though.

My family were thrilled to discover that Queenstown and surrounding areas are extremely dog friendly with so many tracks and walks on and off leash right on our doorstep. A really easy, kid and dog friendly one close to home is Lake Hayes Loop Walk which is 8km round the lake and kids can ride their bikes.

Another favourite is Jacks Point Track which is more difficult terrain but the scenery is worth it. Pre ski season we also went up The Remarkables and went hill walking or tramping as its known over here. We purchased a really handy Dog Rescue Sling from a company called Fido Pro which we take on our walks with us just in case one of us pups gets an injury and we are miles from the car or help. being large breed dogs we’d be hard to carry for long periods without it. There are big hikes you can do with your dogs into more remote locations where you stay over night camping or in very basic rustic huts. This is something on our bucket list.

One of the comforting things here is there’s no snakes to worry about. Also we don’t have to worry about ticks this far down south either. In the North Island they need to be more aware of ticks (so I’m told) and also there’s certain areas dogs aren’t allowed as there are Kiwi’s (the very cute Native Bird of NZ) living there and like the Koala’s in Australia its not a good idea to have dogs roaming through their habitat.

There’s a couple of helpful online sites which my family found. One is a Facebook page called Hiking with Dogs New Zealand which is really helpful as people put in where they are travelling to with their dogs and which route they are taking to get there and ask people to give them tips on all sorts of things from dog friendly accommodation, eateries, and also which walks they recommend. There is also a Facebook page Queenstown Lakes Dogs where everyone is so helpful with info on the local area for dogs and owners.

I miss the warm ocean and especially Castaways Beach which was my favourite spot for dip in the sea and run around in the sand. We miss our best buddy Angus @F1gussy who we’d often walk with too. I still go for swims most days but now I have to practice The Wim Hoff Method when I do so as Lake Wakatipu is freezing cold. I don’t hang around in there very long. We’ve made a new local buddy Jasper the Pointer who’s super quick and super fun to play with. We got to meet two instagram fur friends which was very exciting when they were here on holiday from Auckland @xiatheshepherd and @lifeofkokogsd hopefully we will meet up again next time they are down too. We’ve also been following and chatting with Henry @thatwanakadood who lives just over the Crown Range in beautiful Wanaka. Seriously do yourselves a favour and check out his page for gorgeous NZ scenery and a very funny and talented handsome dog.

Winter here has been fun. Especially the first day we woke up to snow on the ground outside our house. Disco and I went crazy for it! It was a bit like playing in the soft sand, the more crazy we got, the more the snow got flung around, which sent us into a frenzy! The kids chucked snowballs at me (as I love a ball) but they kept disappearing when I’d bite them?! Disco has to be careful with his long fluffy hair on his feet as the snow sticks to his fur and goes rock hard like icicles and gets stuck between his toes. We think we might invest in some snow booties next year.

We are all very excited to see what opportunities each season brings with it here. The locals of Queenstown are so friendly and welcoming we feel very lucky to be calling this amazing place home. C’mon over when the trans-tasman bubble reopens we’d love to see you and you won’t be disappointed! 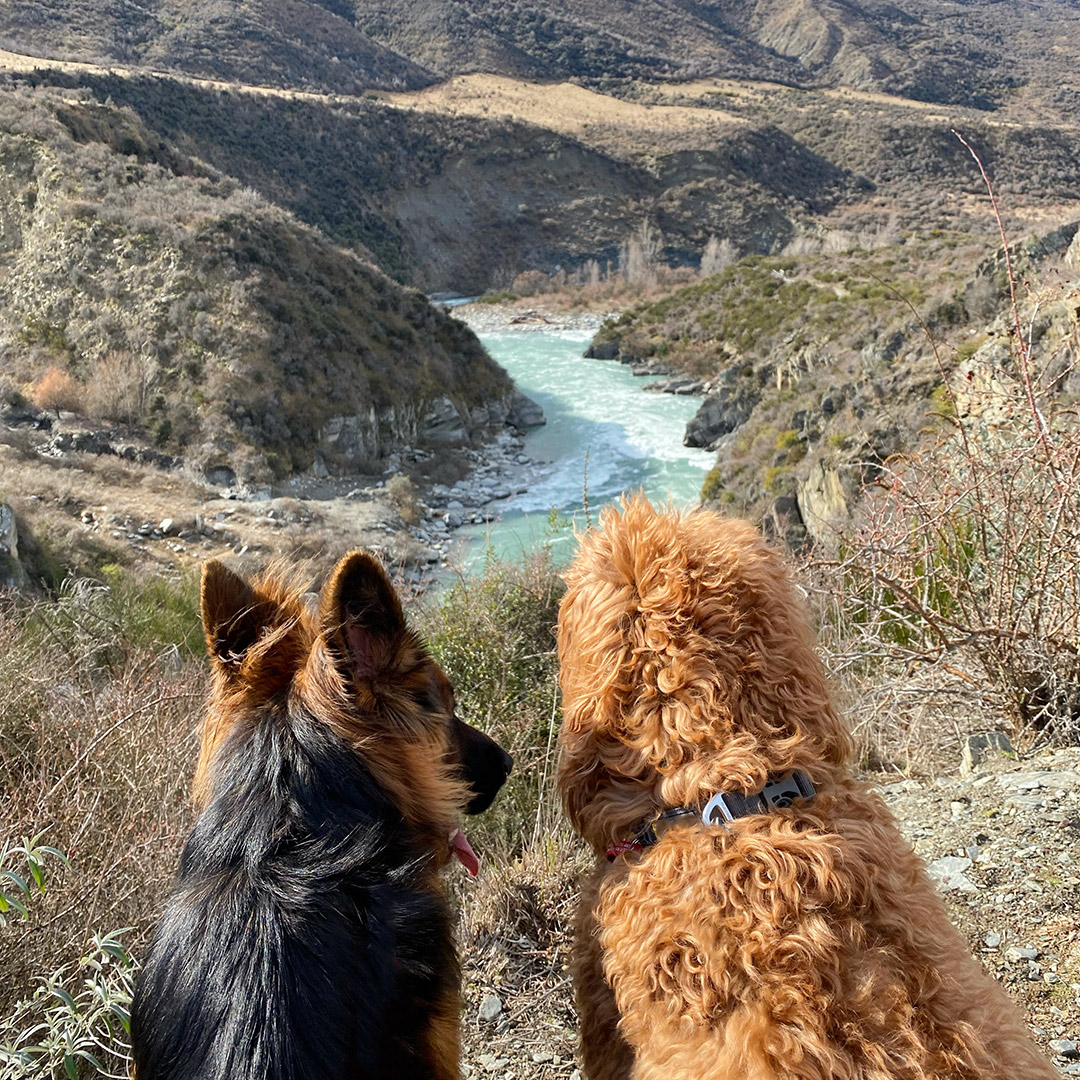 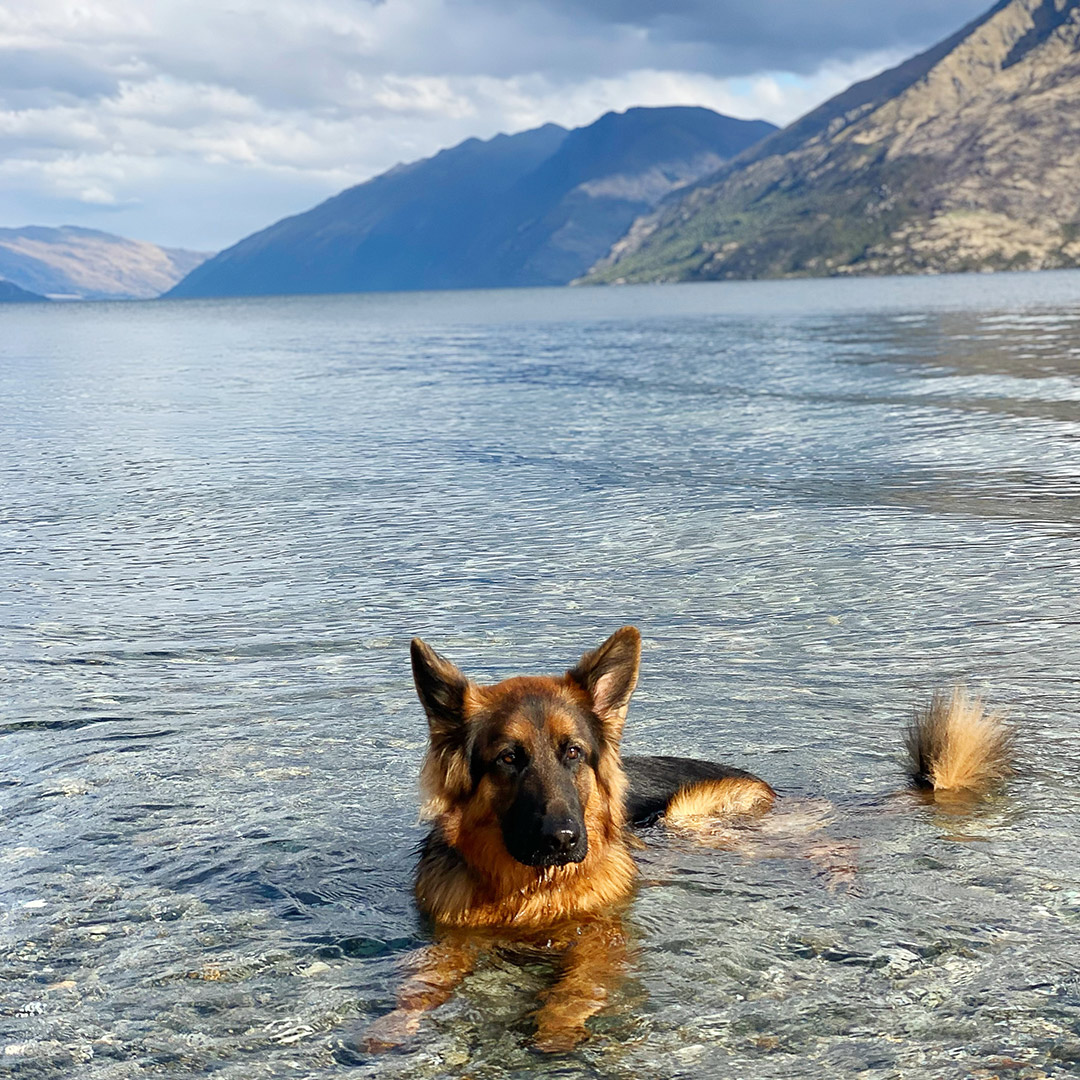